Poland is mostly flat but we have some mountains and rock climbing. I cannot describe all of them (~200), so just I write about best spots where you can do rock climbing. Lucky this locations are very close to big cities like Kraków, Katowice or Wrocław. In a different article, I write about mountaineering in Tatras (the highest polish mountains) - check if you want.

Very quick - like I say. Poland is mostly flat, but on the south side, you have almost 200 climbing areas and probably 15000-20000 routes! You will find in Poland typical rock: limestone, granite, sandstone. Routes have to 30 meters, from 3+ to 9a. You will find sport and trad routes. Generally, all that you need ;). We have also mountaineering, dry tooling, bouldering but I will don’t write here about this. Just only rock climbing. 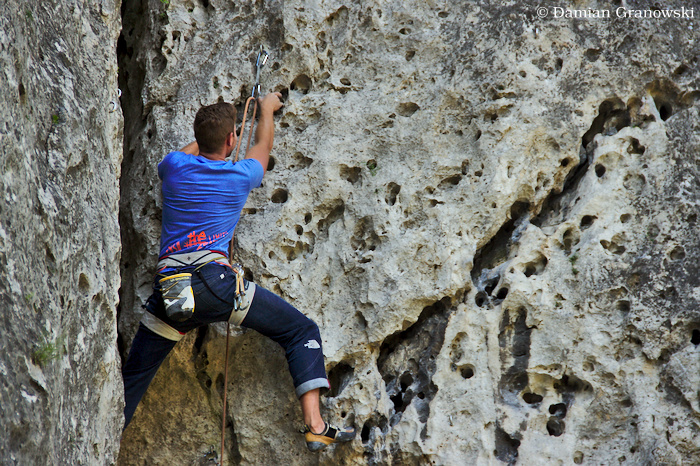 Rock climbing near of Kraków (Łabajowa Rock in Będkowska Valley)

Below practical info and later bigger description of areas.

Poland is a big country with long history. There is a lot of things to see. Good idea is to connect climbing with touring or hiking. Of course, we are climbers then first I will tell you about climbing. At the end of the article, you will find some ideas for a rest day. 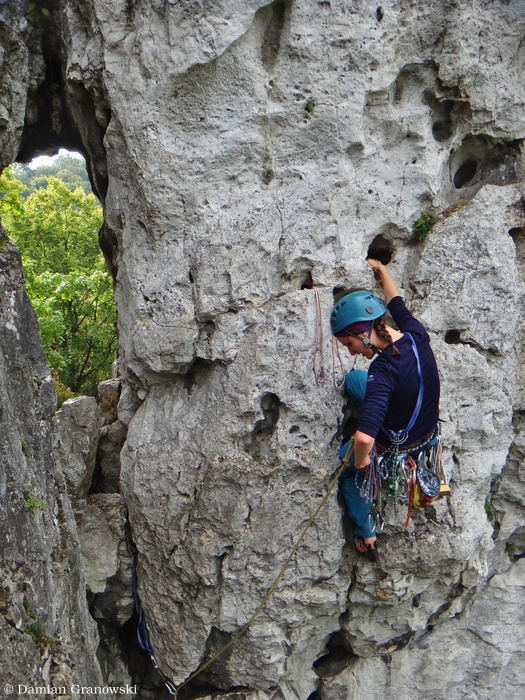 Poland has good airplane connections with almost every country in Europe. To Kraków, Katowice and Wrocław fly cheap airlines like Wizzair, Ryanair. At this places, you can rent a Car, but airports have good public transport. From Kraków and Wrocław you can go to crags by public transport! From Katowice, You have a good connection to Kraków, Wrocław, and Częstochowa.
The most comfortable will be traveling motorway by car. Be prepared that polish roads are not so good like in Germany ;). In every bigger climbing area, you will find camping or guest houses.
Be careful and parking only in designated places (the best way to avoid conflicts with locals). Usually, the best places to parking you will find in guidebooks. Good option to check a status of the crag is on website naszeskaly.pl (Our Crags). Something like American Acces Fund. On naszeskaly.pl you will find info and status of different crags
Approach to crags depends from the area - on Jura it should not take more than 30 minutes (rare is 40-60 minutes), on Sokoliki 25-45 minutes. 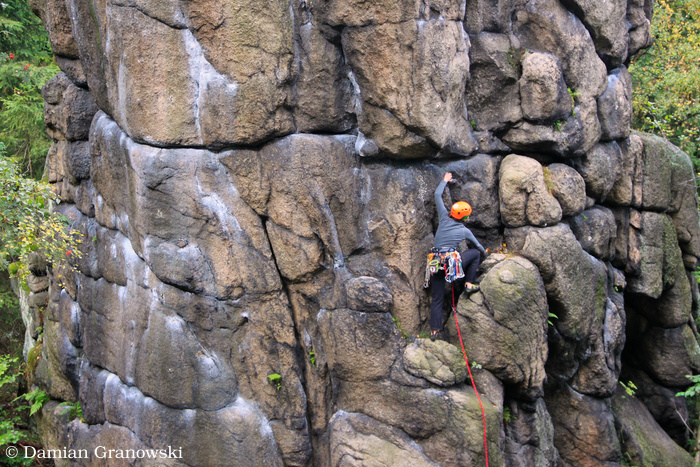 Accommodation opportunities depend from a place. But almost everywhere you will find private rooms and in most popular crag areas will be campsite or hostel.
In the most cases sleeping in the woods is not allowed. There are some places like Kobylańska Valley (free campsite in the Valley) or in Podlesice, but the better option will be to use (cheap) campsites (2-3 euro for tent, 5-7 euro for a bed in the house).
On my climbing school website, I wrote two articles about accommodation near of Kraków and Sokoliki. Articles are in Polish… but you can use Google Translator and Google Maps ;).
Accommodation and eating near of Kraków
Accommodation and eating near of Sokoliki

Generally in every place is no problem with finding grocery shops. In bigger cities (even villages) will be a market.
Popular crags areas are places where is a lot of people, then you will find there some restaurant (check my articles about Kraków and Sokoliki). 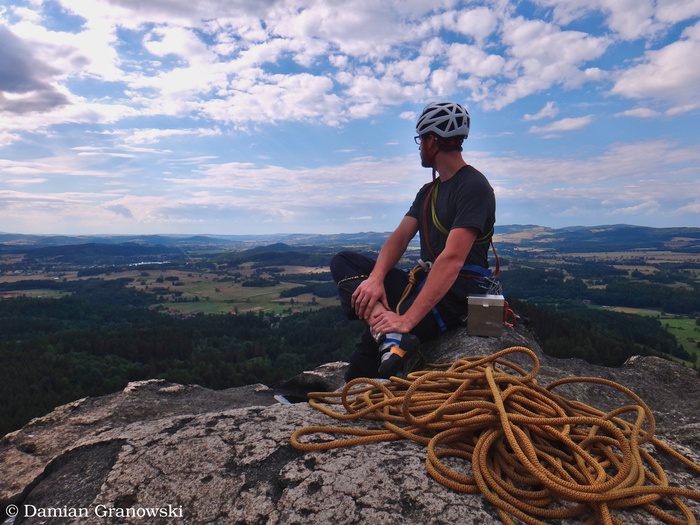 Almost every crag in Poland is in the guidebook and descriptions are quite good :-). We don’t have guidebooks in English, but I think that every climber with a quarter of the brain will know how to use books :). In guidebooks, you will find maps, GPS locations (crag and parking), approach patches and short notifications “How to Use the Guide” in English.
The most popular (and very actually) are: 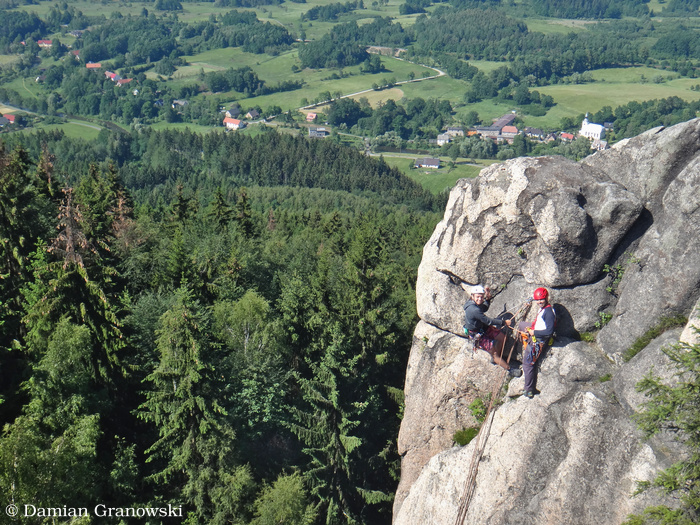 Another option is Big Brother Google. A lot of crags topo is available online. Highly recommended are websites like: wspinanie.pl, goryonline.com, toprope.pl, drytooling.com.pl (my website with topo of multipitch climbing in Tatras). But the best website is Portalgorski with its topo base of polish crags! You also have dedicated App ;).
Last but not least - Watch out! Advertise ;). If you want help then write an email to Me. I will try to advise you the best option for classic climbs in Poland.
You can also hire me to be your Climbing Guide or Instructor. Check my offer on this page: Climbing Courses in Poland. 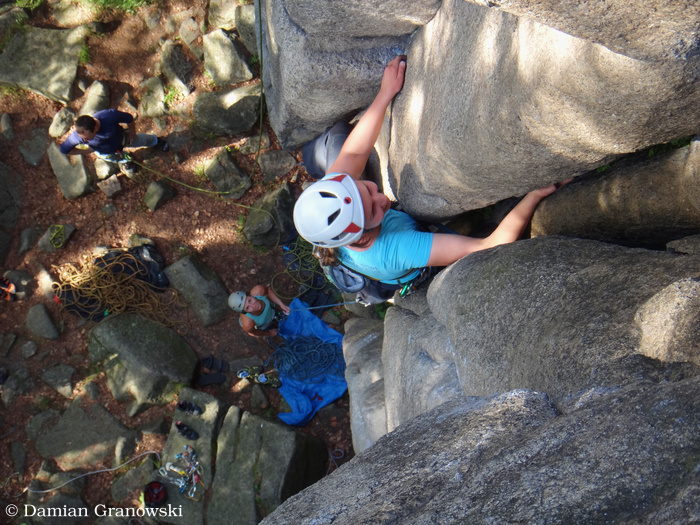 In Poland, you can climb all year, but for Rock Climbing best season is from April to September. One important thing - Our climate doesn't have something like “long period of stable weather”. It is mostly random and I can just tell you that some months probably will be ok, but you never know ;). Generally is ok, last long period with big rains was in 2009 (almost one month of rain and floods) ;). Usually 1-3 days of rain (Mostly light rain).

January-February-March: We have winter. Sometimes you can climb, when are better periods of good weather. These periods are very random and temperatures are from 0-10°C (mostly below zero). But this is a good time for dry tooling.
April-May: There is spring but weather can be random. Usually, the temperature will be from 10-30°C but can be also 0-10°C in some days. Spring in Poland has good weather, not so many rainy days (usually storms) and temperatures are quite good for hard climbing. In this time Jura is very beautiful with fresh green grass and trees.
June-July (and two weeks of August): The hottest (20-35°C) and most wet (storms) time of the year. But like I say before, usually, it is a storm, then you can climb very quickly after rain. But shit happens and you can have 2-4 days of heavy rain. But mostly you must search for crags in shadow because Sun is too hot.
The second part of August-September: Probably best time for climbing in Poland (if you are a serious climber). A few rainy days, good temperature (10-25°C), rare storms and autumn in our country is wonderful.
October: For hard climbing is very good (5-20°C). Not so many rainy days (but happens that 2-3 days of rain). Days are shorter and sometimes crags in deep Valleys (like near of Kraków) can be wet (morning fog).
November-December: For rock climbing not recommended time: a lot of rainy days, low temperatures, short days. But a good time for dry tooling ;). 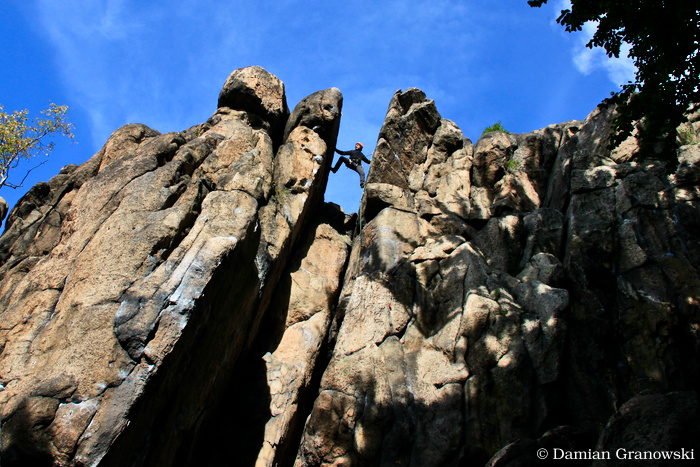 Sukiennice in Sokolikie. One of the best crags in Poland

You will find here almost 200 hundred crag areas with 15-20k routes (mostly sport, but you will find also nice trad routes). Difficulties between 3 and 9a (even 9a/a+). We have three main type of rock: limestone (Jura), granite (Sokoliki and Rudawy) and sandstone (Podkarpacie and Hejszowina).
Routes are to 30 meters high, but average high is 15-25 meters. We have almost rock formation what climber need to live. There are some higher crags like Sokolica, Łysina or Żabi Koń where you have multipitch climb (usually well bolted). 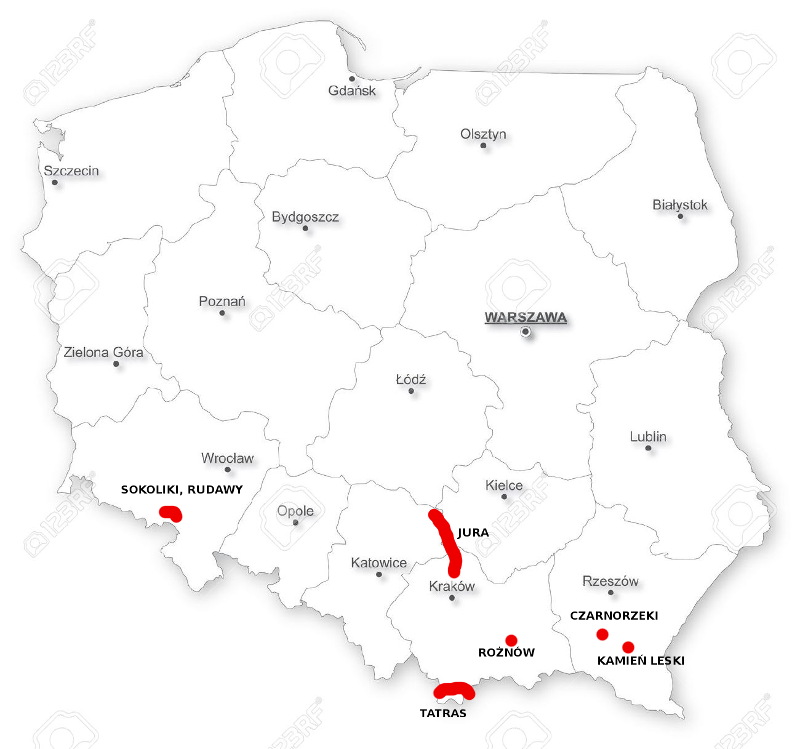 Polish limestone has challenging routes on tiny holds with worse friction than the one found in most of the climbing spots in the Western Europe. Jura has a lot of small pockets (worse than on Frankenjura) and on harder routes, this pockets will be your footholds. Watch your fingers! I promise that after climbing trip to Poland your strength in fingers and footwork will improve ;).
Typical Polish route (at grade 6b-7b, ~20m) in white limestone is vertical with small crimps, pockets, small footholds and endurance climbing. We don’t have many overhanging routes like in Spain, but there is some climbing in roofs. Don’t dream about climbing on tufas in Poland ;).
Granite in Sudety (Sokoliki) are roughly and they have a lot of crimps and cracks. Cracks are not like in Yosemite where you have only cracks... and jamming is mandatory. In Sokoliki lot of (not every) routes have cracks, crimps, jugs and other holds.
Usually, grades have been given in the Kurtyka Scale. Below is a table with the comparison.

Routes are equipment in rings. Belay stances are from 2 rings and chain. Nowadays is very rare to have a route with old protection (especially bolts in limestone).
There is some outstanding trad climbing - most of them in Sokoliki, Hejszowina (sandstone) and Tatras (multipitch). But some of them are on Jura and this limestone trad climb is mode demanding (irregular crack, then you must use nuts and hexes). 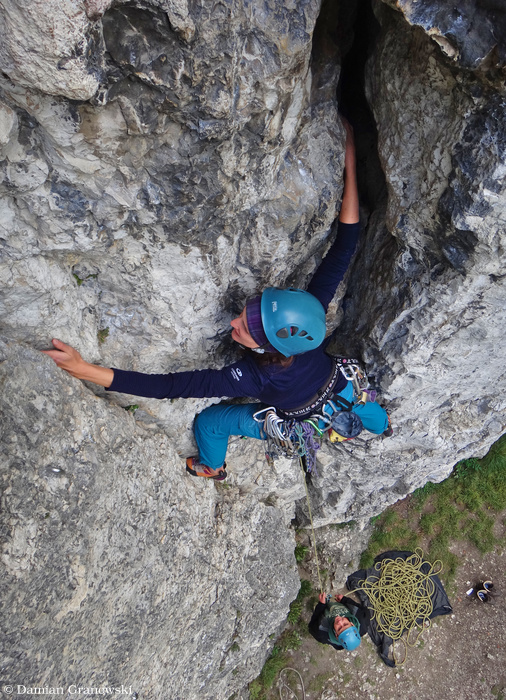 Limestone climbing in Bolechowice Valley (near of Kraków)

What gear do you need?

Standard rope in Poland is single 60m. 13-15 quickdraws should be enough. On polish limestone, the best are climbing shoes with a hard sole and sharp tip (a lot of small pockets). The standard for belays are 2 ring + chain and routes are well equipment.

- set of cam (to #4 Camalot Black Diamond) on harder trad routes set of microfriends.
- set of nuts
- set of slings
- some alpine quickdraws

On Jura (limestone) better than cams are hexes (irregular cracks). 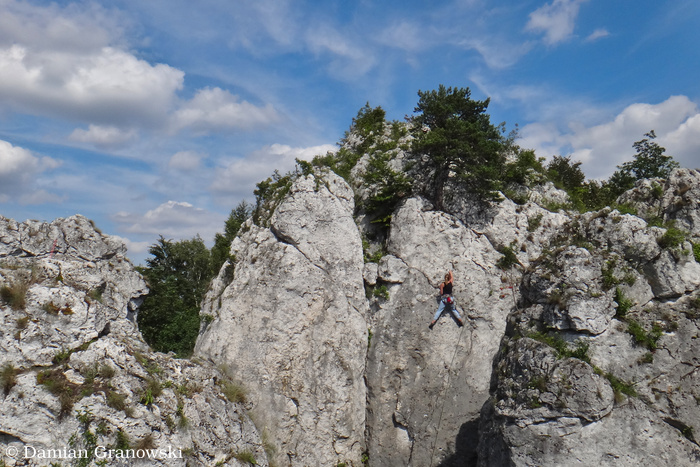 The best places on Jura 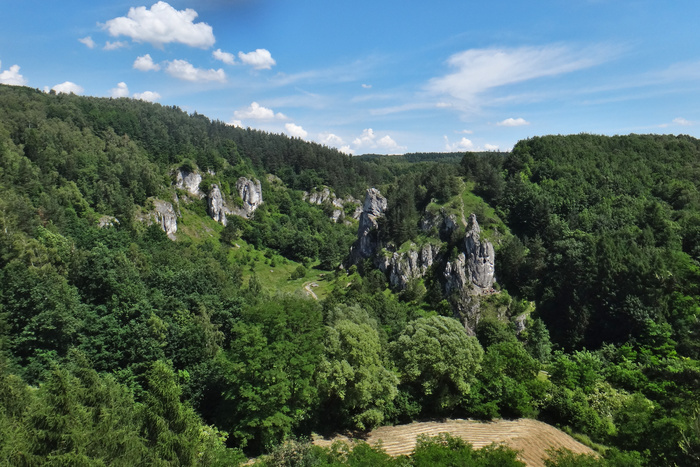 Kobylańska Valley (near of Kraków)

Sokoliki
Góry Sokole is the north-west edge of Rudawy Janowickie, but is often regarded as a distinct location. The rocks here are also granite, and the area is subdivided into three regions: Krzyżna Góra, Rejon Sokolika and Rejon Sukiennic, all of which are also a part of Rudawy Landscape Park.
This small mountain range offers best granite climbing in Poland (I don’t include multipitch climbing in Tatras). On this area is ~1000 sport and trad routes (also multipitch climbing to 60 meters).

Rudawy Janowickie
Rudawy Janowickie is a mountain range in the Western Sudetes, fairly close to the border with the Czech Republic and Germany. It’s located about 100 kilometres west of Wrocław and is enclosed by Rudawy Landscape Park (Rudawski Park Krajobrazowy). The mountain range is commonly divided into four regions: Rejon Zamku Bolczów, Grupa Fajki, Grupa Skalnego Mostu and Starościńskie Skały, each of which offers numerous granite rocks, higher than the limestone peaks in Jura. Lot of climbing in Rudawy are on trad. Also area is bigger than Sokoliki - You will have longer approach to crags. 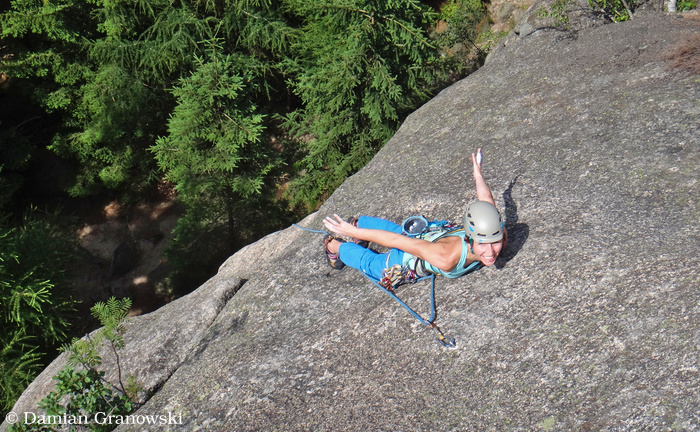 Other places
In Poland you will find more (small) crag area. I will mention about most popular and recommended to climb.

Sandstone areas
Probably best sectors are: Rożnów (close to Nowy Sącz), Kamień Leski (near of Sanok) and Czarnorzeki (close to Rzeszów). This second should be better (more routes).
On the Lower Silesia (border between Poland and Czech Republic) is Hejszowina, where are big sandstone walls. But protection is from rings (long distance between them) and knots :). Like in Czech: Ardspach and Teplice. 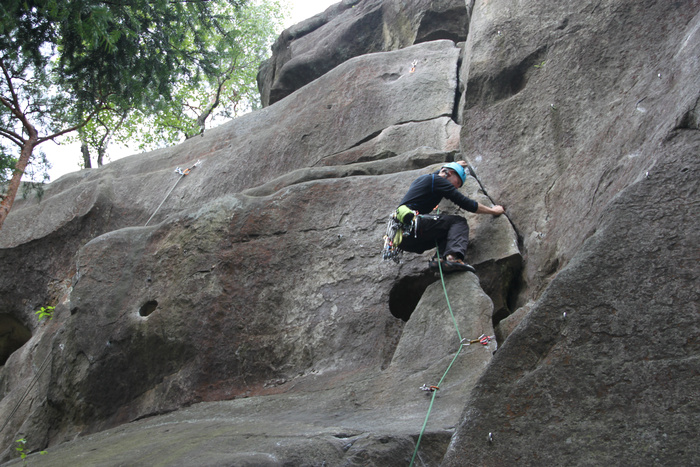 Sandstone sport climbing in Czarnorzeki (near of Rzeszów) 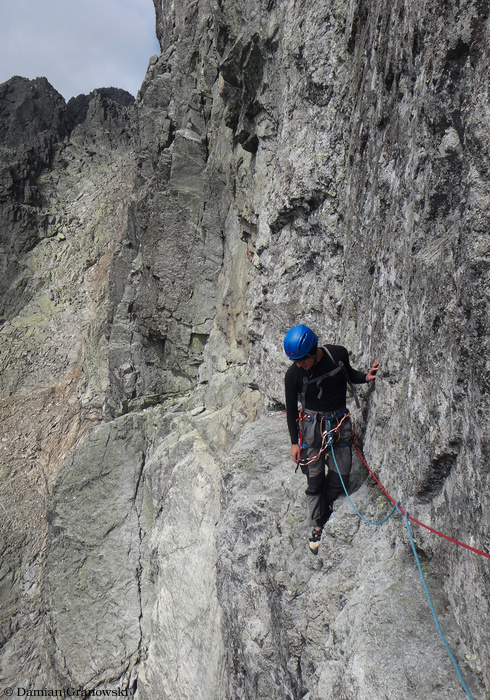 I hope that this article was helpful for you. If you have any question then contact with me. Also I'm climbing instructor then if you want I can be your guide on polish crags or you can take part in my climbing courses near of Kraków or Sokoliki. Check there for more information: Climbing Courses in Poland.

Warning: count(): Parameter must be an array or an object that implements Countable in /home/damgran/domains/winterclimb.com/public_html/templates/gk_rockwall/html/com_k2/templates/default/item.php on line 151
Rate this item
(6 votes)
Tagged under
Tweet
More in this category: « Famous inspirational climbing quotes about mountaineering, rock climbing, mountains and also funny quotes :) Best climber's blogs »