Jerzy Kukuczka (1948-1989) is counted among the most outstanding mountain climbers in the world. After Reinhold Messner, he was the second man in history to have captured the Crown of the Himalayas. He do it in better style, than Messner: under 8 years, 11 new routes, four winter ascents. Only on one ascent, he use oxygen. He was one of an elite group of Polish Himalayan mountaineers who specialized in winter ascents (called Ice Warriors).

He is the first man who made the first winter ascents to the 3 eight-thousanders: Dhaulagiri with Andrzej Czok in 1985, Kangchenjunga with Krzysztof Wielicki in 1986 and Annapurna I with Artur Hajzer in 1987. One of the hardest routes in Karakorum is Polish Line, new route on South Face of Kw (with Tadeusz Piotrowski), which no one has ever repeated. 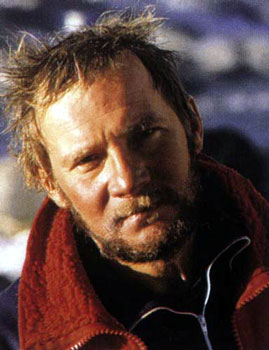 Kukuczka was born in Katowice (Poland) in 1948, 24 March. He end primal school and trade school in Katowice.

His first rock climbing (then only climbing) was in 1965 (4 September). His friend take him to Podlesice, one of climbing spot with 25 meter high, limestone walls. At this first day, young Kukuczka feel that climbing will be very important thing in his life.

"I made a fantastic discovery. Rock fun pulled me so much that I stopped everything else for me to count "

Soon he send alpication to Mountaineering Club in Katowice. In 1966 he pass mountaineering course in Tatra Mountains (his instructors were Janusz Kurczab and Kazimierz Liszka. In Future his climbing partners). In next years he climbs in Tatras - every year on higher level.

In 1971 with Jerzy Kalla and Zbigniew Wach do first winter ascent of Kurtykówka VI+ (Wojciech Kurtyka route. At this time the hardest climbing route in Tatras). Next year with Andrzej Machnik send new route on North Pillar of Mały Durny Szczyt.

After his second winter season he was appreciated by elite climbers from Mountaineering Club and he could go to Dolomites in Italy. At this time Poland was communist country. Going abroad was hard and not for everyone. One of chance was climbing trip (organised by Mountaineering Club).

In Dolomites with partners send new route (Direttissima delli Polacci). At this ascent he was hit by stone, but all members of team end route. After this accident he spent 6 days in hospital and return to mountains. Restults: one new route and repeat Aste-Susati on Punta Civetta. He return to Dolomites in winter and do first winter ascent of Via dell'Ideale (soutrh face of  Marmolada d'Ombretta).

Summer of 1973 he go to Mount Blanc Massif. With Wojciech Kurtyka and Marek Łukaszewski do new route on Petit Dru (Petit Jean). At this trip he also do four first polish ascents (amont others: Major on Mount Blanc). In 1974 he ascend on Mt. McKinley (now Denali) on Alasca. He has several frostbites on toes and in generally he was weak on high altitiudes. One year later he get married with Cecylia Kukucza. On his honeymoon he do... new route on Grades Jorasses :-).

At this time in Poland your climbing career look usually like this: Tatras, Dolomites, Alps (or Caucasus), Hindukush, Himalays or Karakorum. Kukuczka climbing career was almost like this :). In 1976 he goes to expedition to Hindukush. He ascent solo Kohe Awal and Kohe Tez. Two years later he return and do two more good ascents.

In 1981 he goes to New Zealand with Krzysztof Wielicki and Ryszard Pawłowski.

Kukuczka's record shows why he is considered by many to be one of the best high-altitude climbers in history. He ascended all fourteen mountains in eight years, a shorter time than any climber before or since. In the process, Kukuczka established ten new routes and climbed four summits in winter. He was one of an elite group of Polish Himalayan mountaineers who specialised in winter ascents.

First time in Himalays he was in 1977. He tried Nanga Parbat, but without succes.

On 17 February 1980 Leszek Cichy and Krzysztof Wielicki do first winter ascent on Mount Everest. Expedition leading by Andrzej Zawada leave Base Camp and some Camps (I and II) on normal route on Everest. Perfect for next - spring - polish expedition on Mount Everest. After one month preparation route to summit was ready. Andrzej Czok and Jerzy Kukuczka summited on May 19, 1980, Everest got a new line up the South Pillar. This would be the only time that Kukuczka used supplementary O2.

Already the next year, in 1981, Kukuczka reached a double goal on Makalu: A variation on Makalu La – the huge saddle between the main peak and Makalu II – and the NW Ridge, solo.

Next came Broad Peak: In 1982, Kukuczka returned to Himalaya with friend Wojciech Kurtyka to climb the normal route.

Wojciech Kurtyka and Jerzy Kukuczka had climbed new routes on both Gasherbrum I and II – in alpine style.

Kukuczka and Kurtyka returned – to open a new route, including the traverse of the Three Broad Peak’s summits.

1985 started out spectacular for Jurek: He climbed Dhaulagiri (with Andrzej Czok again) on January 21! On the descent they lost route and have hard bivaq (without tent).

And before the winter ended, he go alone to Base Camp on Cho Oyu (where was polish-canadian expedition). He joined three other climbers from Poland – Maciej Berbeka, Maciej Pawlikowski and Andrzej Heinrich – to the SE Pillar on Cho Oyu, for a first ascent. They summited February 15, and it was the first time a new route had been opened on an 8000er in winter. Kukuczka do two winter ascents in 25 days!

Summer of 1985, Jurek teamed up with Andrzej Heinrich, Krzysztof Łobodzinski and a young Mexican Carlos Carsolio (a future‘youngest’ climber to complete the 14 8000ers) – for another ‘first’: The SE Pillar of Nanga Parbat.

For his next 8000er, Jurek would patiently wait for the winter to close in. Only then would he climb Kanchenjunga, summiting the normal route on January 11, 1986. His climbing partner was Krzysztof Wielicki, another Polish ‘Ice Warrior'.

To maintain the level, the next peak could be no other than K2: And what Jerzy Kukuczka and Tadeusz Piotrowski did there was a real lesson on extreme climbing. The route they opened on the South face is still a waiting a first repetition. The Kukuczka route, rarely attempted, combines sustained difficulty with ‘suicidal’ exposed passages. They summited July 7, but at a terrible prize: Piotrowski fell to his death ondescent, by the Abruzzi Spur (problem with crampons).

Jerzy climbed Manaslu that same year: Another first – again in winter conditions. On November 10, Kukuczka and Artur Hajzer made a first ascent of the Manaslu NE face.

After his early November climb on Manaslu, Jurek and Artur Hajzer summited Annapurna North Face on February 3, 1987. Hajzer returned to the mountains with Kukuczka already in September that same year. That’s when they made a first ascent of the East Ridgeon Shisha Pangma (Summit on September 18, 1987).

Jurek died attempting (with Ryszard Pawłowski) an alpine style climb of the unclimbed South Face of Lhotse in Nepal on 24 October 1989. Leading a pitch at an altitude of about 8,200 meters on a 6 mm second-hand rope he had picked up in a market in Kathmandu, the cord cut or snapped from a fall, plunging Kukuczka to his death. Pawłowski was in big trouble: Alone on 8200 on unclimbed face. Only years of experience help him on way down to Base Camp.

Jerzy Kukuczka left behind a widow (Cecylia Kukuczka and two children). One of them - Wojciech Kukuczka - later will do ascent on Mount Everest. 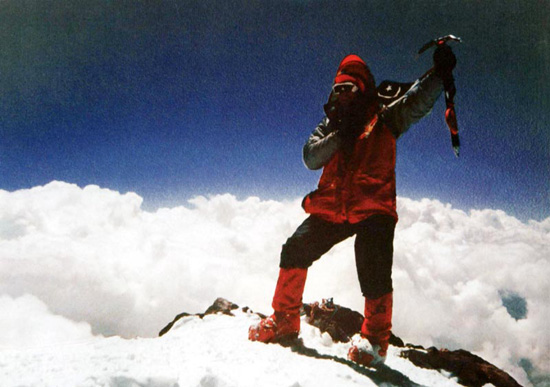 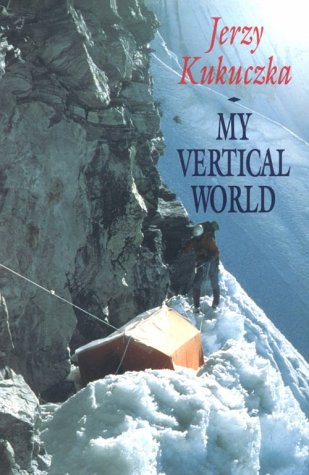