During Greg's 30-year climbing career, he's conquered 5.13 routes, A5 big walls and the highest peaks in the Himalaya, namely Everest and K2. Greg's climbing roots lead back to his native Australia, where he was a teenage collector of snakes. When a deadly tiger snake bit him, he turned to safer activities- such as rock climbing. As a teenager he did many first ascents of free climbs on the notoriously difficult cliffs on Mount Arapiles, and even today he maintains a high level of free climbing. In 2002, he established a spectacular multi-pitch 5.13 first ascent called Excommunication on a desert tower called the Priest. After taking up residence in America in 1980, he made his mark in Yosemite with two new routes on El Capitan. Big walls led to travels to the Himalaya, to which he has made 13 mountaineering expeditions. More recently he has turned to exploratory mountaineering. In 1999, he trekked through a remote jungle in Northeast India to seek out unclimbed peaks on the Indo-Tibet border, and his team became the first Westerners to encounter the Bungaroo people of the upper Kurung Valley. His most recent adventure was a 120-mile lightweight backpacking traverse of Comb Ridge, a stretch of the Arizona-Utah desert that encompasses the heartlands of the ancient, and vanished, Anasazi Indian culture. He has recorded his career in books, photographs, TV documentaries and articles for magazines such as Outside,National Geographic, and Climbing. 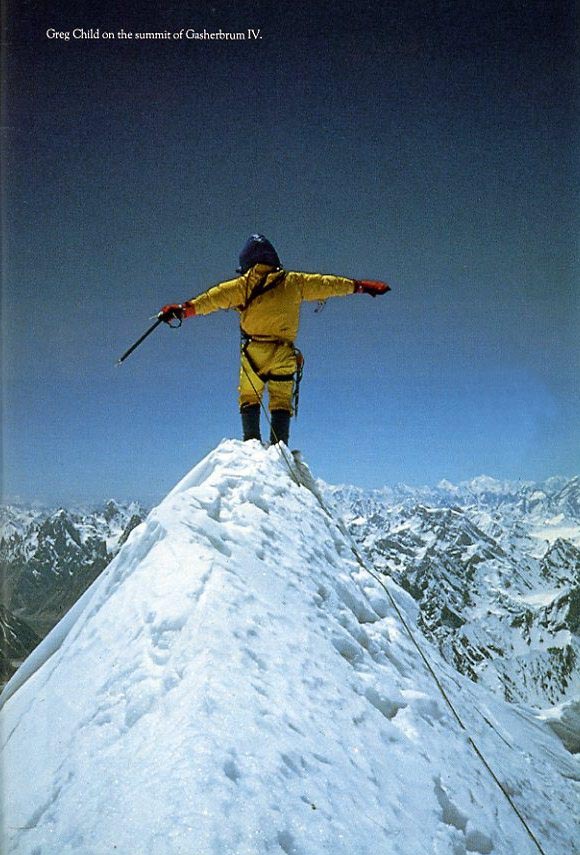 Somewhere between the bottom of the climb and the summit is the answer to the mystery why we climb. Greg Child

If we ever have children and they become climbers I'll tell them, "Stay away from expeditions. They'll make you poor and neurotic. Greg Child

Maybe Himalayan climbing is just a bad habit, like smoking, of which one says with cavalier abandon, 'must give this up some day, before it kills me. Greg Child

Been there, done that. Greg Child about Everest

The mountain is nothing without people on it. Often you part expedition exasperated, but a year or two later you go back with the same partners knowing there's potential in this human relationship. Greg Child

Near the foot of the mountain we visited a yogi who dwelled in a hollow tunneled beneath a boulder. He pondered our notion of climbing Shivling and said: 'First travel, then struggle, finally calm. Greg Child

More in this category: « Eiger west face on skis... almost Breithorn - one of the easiest 4000 metre peaks in the Alps »