The bells were ringing in the dale,

And men looked up with faces pale.

The mountain smoked beneath the moon.

The dwarves, they heard the tramp of doom.

They fled the hall to dying fall

Beneath his feet, beneath the moon.

Far over the Misty Mountains grim,

To dungeons deep and caverns dim,

We must away, ere break of day,

To win our harps and gold from him!

(J.R.R.Tolkien, The Hobbit, Far Over the Misty Mountains Cold)

Up until now, I would always pass the north face of Les Droites on my way to Chamonix. I always thought of it as boring, dull, and maybe too well known. It lacked the inaccessibility of the Grand Pilier d’Angle and its size didn’t measure up to Grandes Jorasses. Hidden behind the steep slopes of Aig. Verte, it was waiting for my attention. Other climbers were maybe drawn to it, given that it bore famous names such as Tournier, Lagarde, Messner, Jasper and many others. It wasn’t until I heard Jamie Andrew telling the story of his struggle to survive on its summit with his companion, Jamie Fisher, that it captured my attention for the first time. One Jamie left his arms and legs there. The other Jamie lost his life. But the one that came back didn’t condemn climbing. New challenges filled his live, giving it purpose. Hearing Jamie tell his story gives one great strength. I admire all those who are able to share what they have experienced in the mountains – not for their climbing achievements, character or deeds, but for their ability to revive memories of others and give them the desire to write new stories. Well, my challenge is to tell you a different story. A story of a dragon. 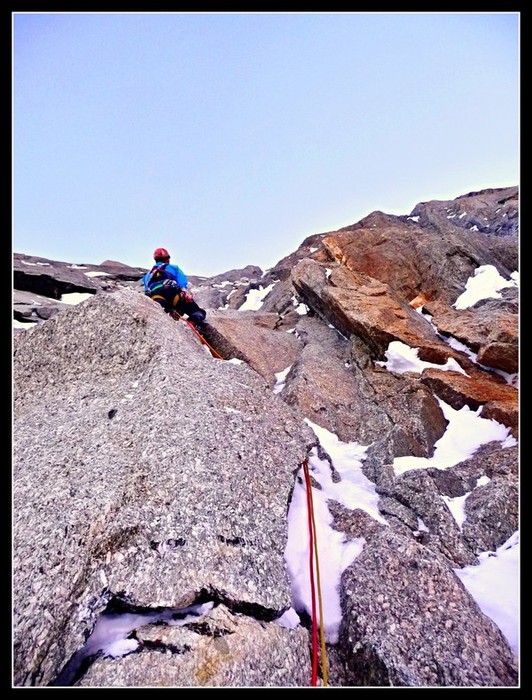 I woke up with a start. Something cold had stroked my cheek. I’m trying to move, but I can’t. I want to run away, but it’s just not possible. It’s almost like someone has tied my legs together. I want to scream, but my dry throat doesn’t let out a single syllable. My eyes are open, but I can’t see a thing, I’m surrounded by deep darkness. I have a headache and my mind is slowly beginning to make sense. I am tied, motionless, alone. Prepared for the worst. And then I suddenly realize I am in a sleeping bag. I slowly loosen the opening with my sore hands and a blast of freezing win cuts into my face. 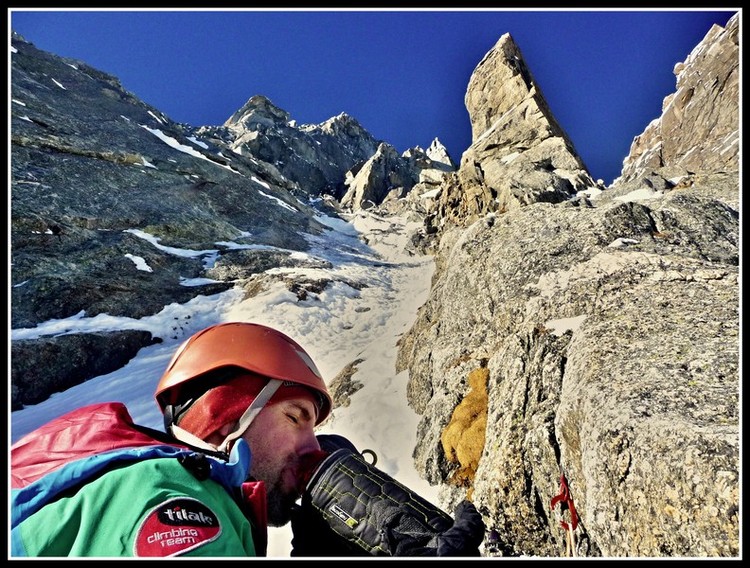 Light. The silver light of the moon shines on everything around. It is so strong that it almost feels like it’s the middle of a day. I look around. I can see all of our stuff hung over my head, like a Winter Queen’s necklace. Carabiners, pitons, cams, set of nuts, tri-cams. Messily hanging there. We had no time or energy to tidy things up before we went to sleep. I gaze at my watch. I slept only for about an hour and a half.

I really want to pee, but I’m hanging in a harness, my sleeping bag wrapped around me. Luckily, there’s a pee-bottle close to me. I carefully take it down, put it on and fill it. And even more carefully I empty it somewhere below us. We are sitting on a narrow ledge nearly seven hundred metres above the ground. Seven hundred metres of solid rock, ice and air below our legs. This is our fourth bivouac, counting the one at the base of the climb. 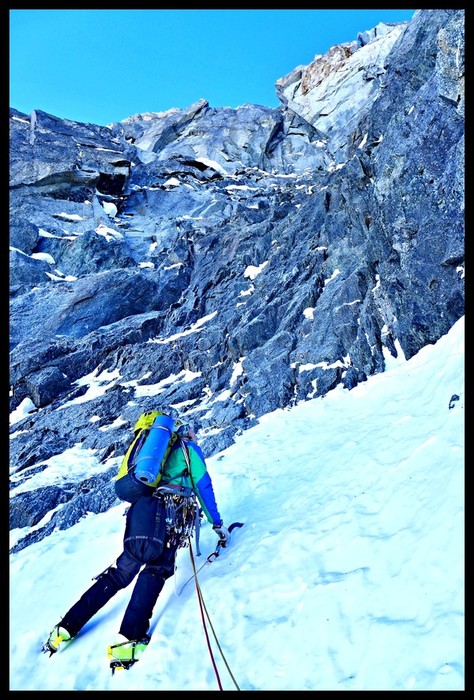 I have a headache. We didn’t drink enough yesterday. But it’s more likely because we started this climb directly from the warmth of the office. From three hundred metres to three thousand. But it is the same every year. I only get two trips a year; work and family wouldn’t allow more. Family. How long has it been since my three kids kissed me goodnight? They always want to come along. “Daddy, you have to take us with you next time.” There’s not gonna be a next time, children. This is the last battle with the dragon. 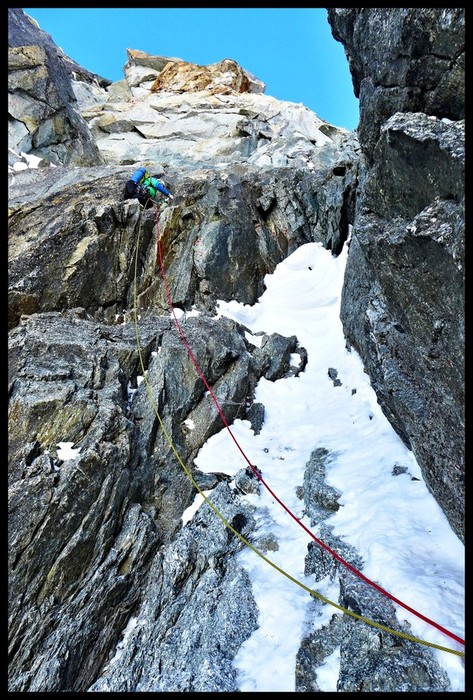 The Dragon is a symbol of powers greater than we can even comprehend. Terrifying and beautiful. It takes a lot of courage to look into the Dragon’s eye. The feeling, when the weight of your body, memories, duties and whatnots goes away for just a little bit, and you can sense the entire endless space and all the possibilities of existence...that’s when the Dragon is spreading its wings and we can take off with it and fly, and fly...harness the Dragon into the carriage of our dreams of the bright future... 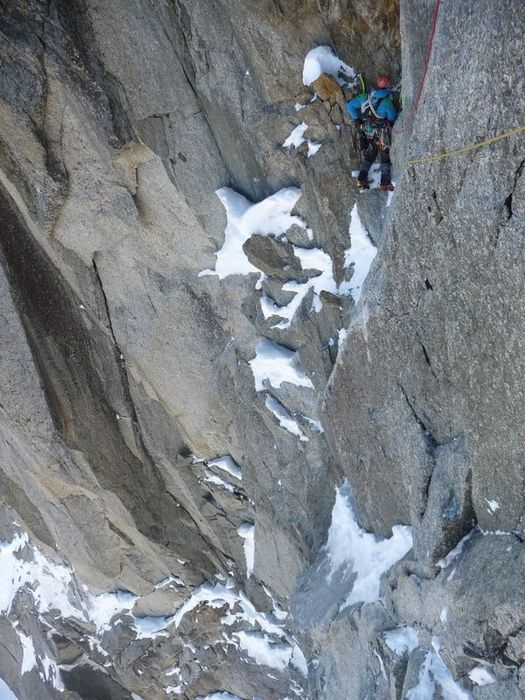 “Hey, Stračes, off belay. Red fix. Yellow in the pulley.” Going smooth. I’m pulling my haulbag and looking at the overhangs above us. I’m searching for some weak spot. Some clue showing the direction of the climb. Will it allow us to climb through that overhanging crack? We have six pitons and four micro-cams. If I have to aid climb, I won’t get too far. Or should I climb more to the right, where the wall steepens into blank faces. It looks like there could be a corner a little higher above. However, cracks in this direction are slightly wider than the adze of the ice axe, plus they are filled with ice in such a way that cams would barely hold the weight of a quick draw. 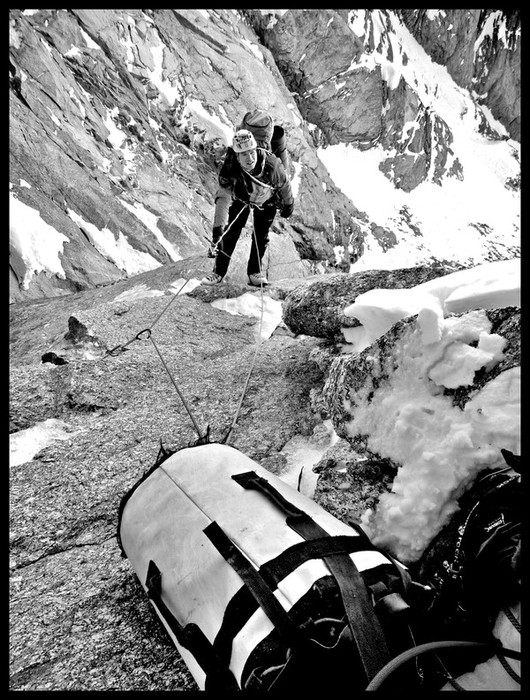 I have to rely on some inner voice a couple times on this face. We only had a small picture of the wall, where we marked possible directions of the climb. Whenever it comes down to deciding whether to climb right or left, something above us leads us the right way. Every pitch could be the last dead end of this new route. However, there appears to be a way on after every edge, even with our limited rack. So far the face has let us through. So far. 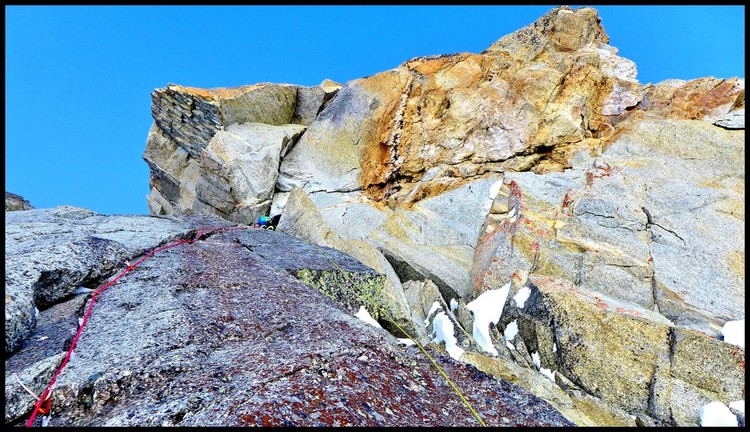 “Stračes, let’s try it from the right. That crack doesn’t look too bad. It should work.” The biggest tri-cam in the narrowest spot will protect Stračes’s belay station. But who the heck will protect me when I fly around him shouting, “High five!”? My gloomy thoughts leave me a couple metres over the belay station and my thoughts dissolve in a sea of granite. I am camming my ice axe in the crack. My left shoulder leans on the edge of a little corner and only by friction the front points of my crampons hang on the biggest crystal of a face with no footholds. Crystals. Steel. Physics. How much pressure can a couple of millimetres of big crystal stand? The steel-silicon friction coefficient. The angles. The calculation. The theory. The equation is not equal. 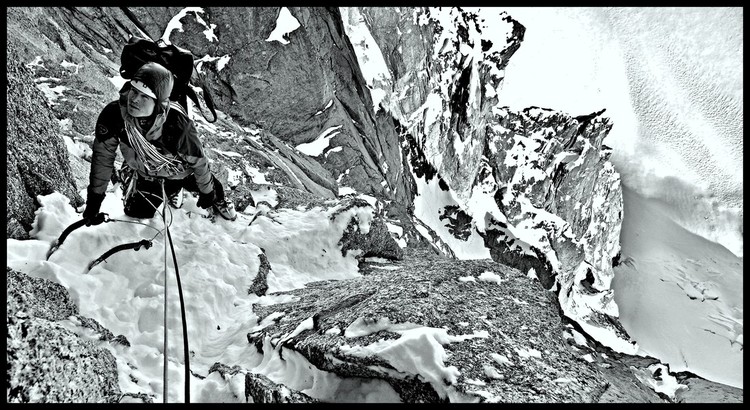 My right foot slips and I can feel the claws of gravity hanging on to my body. Her sharp nails have dug deep into my skin and her cold tongue is licking my back. I gaze into her freezing eyes. She is beautiful, necessary and devastating. Suddenly the air is filled with sulphur. The dragon’s breath is blowing around. My body is embraced by a flame and I can see teardrops sparkling in those beautiful eyes. Her arms have melted and I am still standing. One ice axe, one crampon, one crystal. I can do this. 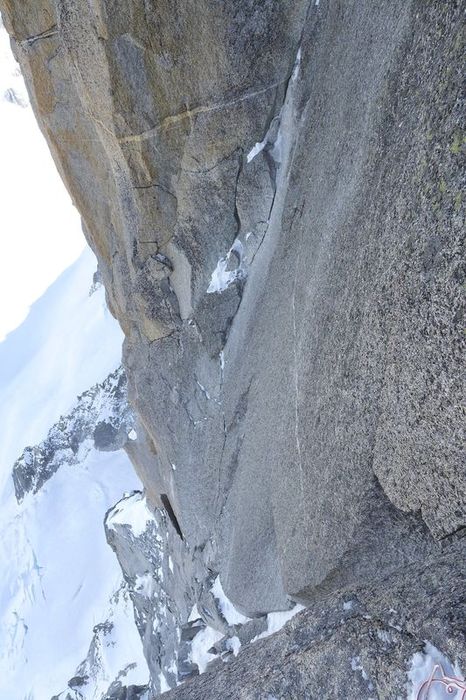 Where I was, I had wings that couldn't fly

Where I was, I had tears I couldn't cry

My emotions frozen in an icy lake

I couldn't feel them until the ice began to break

(B. Dickinson, Tears of the Dragon)

I am sitting in my cosy office. I go through my emails while sipping a cup of hot morning coffee. Endless disputes with customers, who don’t seem to understand that research and development is an art, not a job. Delete.

Documents a couple of pages long filled with more formulas than my restless mind can handle. Delete. 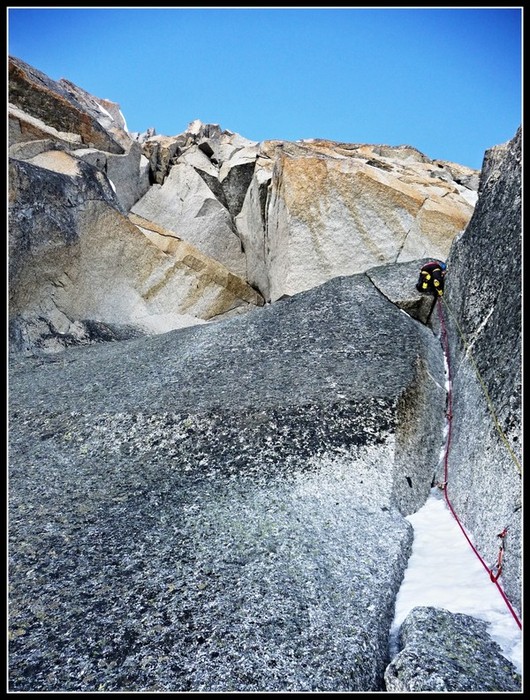 The current weather forecast for Chamonix promises good weather for at least five days. Forward to Stračes. A couple of hours later, cold beer is washing the dust of the German highways from our throats as we clench a picture of the northeast face of Les Droits in our sweaty hands. “Look, Stračes,” I say to my companion between gulps of beer, “there are no climbs on this part of the face, we gotta take a look at that.”

After a short night with no lovemaking we carry backpacks with gear for five days on our shoulders. That is exactly how many days we’re counting on for the roundtrip Argentiere – Grand Montets – Les Droites – Montenvers – Chamonix – Argentiere. We track out a little path in the snow under a face, where we smooth out a platform for our bivouac. The face is unbelievably appealing. We feel like we are in a woman’s lap, where Tournier’s Pillar is the right thigh and Messner’s Pillar the left. We lead the first pitch of our new route. After that we spend our first night under the starry sky with an amazing feeling in our hearts, as always at the beginning of something new. Like Scotland.

Only those that felt the Dragon’s hunger can understand. Only those know how hard it is to soothe it.

Our last pitch leads us to a ridge. This is where the beautiful thighs – Messner’s and Tournier’s Pillar – connect. The way to the summit is open. But the ridge turns out to be more erratic and deceitful than we first estimated. Huge snow cornices, searching for a path, and what you climb up in one pitch, you climb down in the next. The wind is blowing around. We won’t be able to avoid a third bivouac in the face. We sleep in a tiny chimney, half lying, half sitting on a small ledge. I am slightly delirious in my sleep. Tomorrow we will finally see the sun. 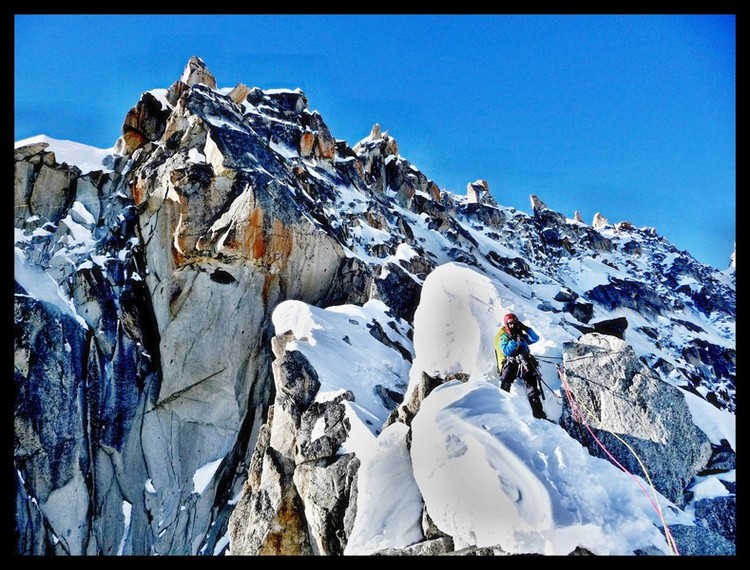 The following morning we continue the endless route, finding our way between the overlaps. We pass the ridge by a few pitches in the north face of the wall. Nearly unprotected. We only have two ice-screws. The ice is rock solid and our tired calves are burning. Who enjoys climbing ridges and endless ice fields? A last dodge and we’re at the ridge leading to the summit of Les Droites.

After four days we are finally in the sun again. We abseil six pitches to the glacier and enjoy the feeling of being in a horizontal position. The feeling of freedom, when sometimes the words, “Gosh, I’m not clipped on anywhere…” go through your head.

We go down to Chamonix the following morning. We have had four days of perfect adventure on the wall that in our memories have shrunk to just a couple of hours. I don’t even know what we did every minute of every day, everything flew by so quickly. Like we were in a different world. In a world of magic, fairytale adventures and dragons in which our hearts declaim: “So what’s next?”

Alpine style, no bolt used, one bivouac on the base of the wall, free on the wall, one on the descent. News and film here. 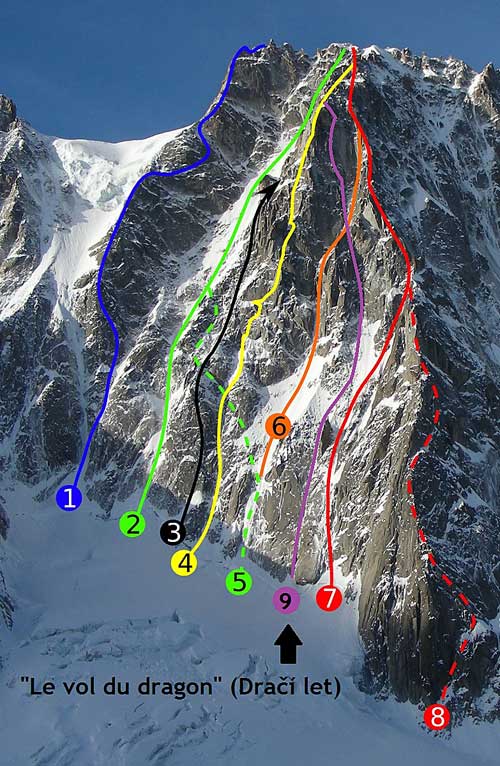 Rate this item
(0 votes)
Tagged under
Tweet
More in this category: « Mountaineering timeline Siesta with Marion »